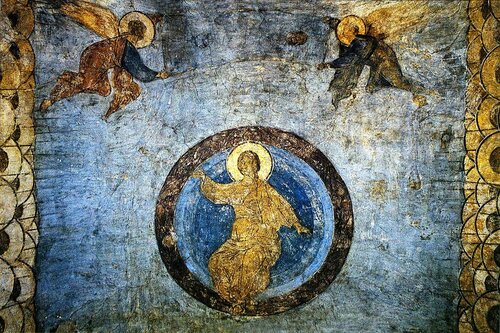 October 30th 2013 marks 585 years to the day after the death of Russia's most revered painter of Orthodox icons. Andrei Rublev was born at the end of the 1340s, probably, in Pskov, not far from Novgorod. In all probability, he was a novice at the Andronikov Monastery in Moscow from his youth, later being ordained as a monk. The first chronicled mention of Andrei Rublev: the master painted the Moscow Kremlin's Cathedral of the Annunciation (1405), along with Theophanes the Greek. / The Annunciation, 1405. 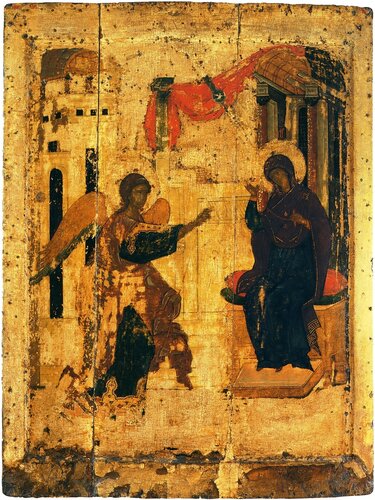 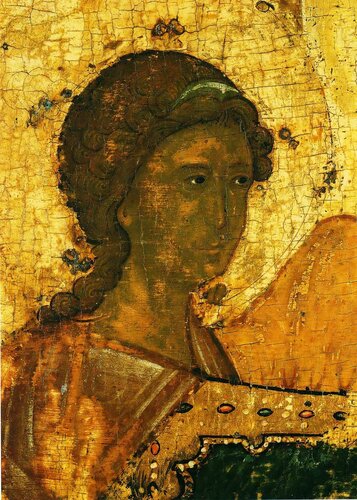 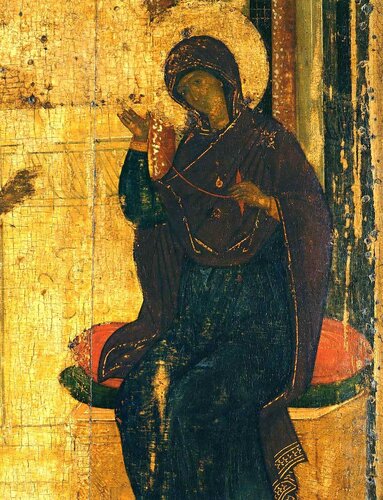 Andrei Rublev started working on the iconostasis in the Moscow Kremlin's Cathedral of the Annunciation. Author's inscriptions on ancient Russian icons are a very rare phenomenon. The extant historical evidence on the life and work of Andrei Rublev is extremely contradictory; for instance, the authorship of "The Transfiguration" has yet to be established. The compilers of the UNESCO World Heritage List define it as a work from the "School of Rublev". / The Transfiguration, 1405. 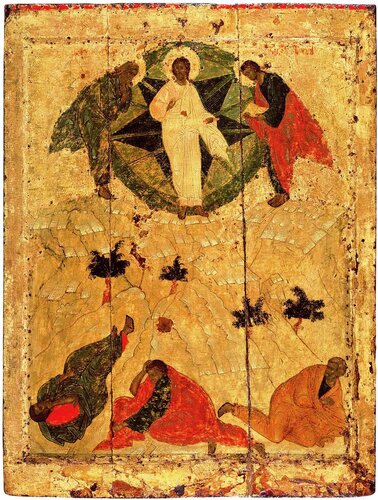 Among Rublev's early works is "The Birth of Christ", also from the Cathedral of the Annunciation in Moscow. A fan of vibrant color in an enlightened ambiance, the creator of "The Birth of Christ" doesn't view forms as flat spots and silhouettes, but rather, as light presence in a shall, but somehow vast space. Everything shown in it is vested with significance, but also great freedom, both spatial and spiritual. / The Birth of Christ, 1405. 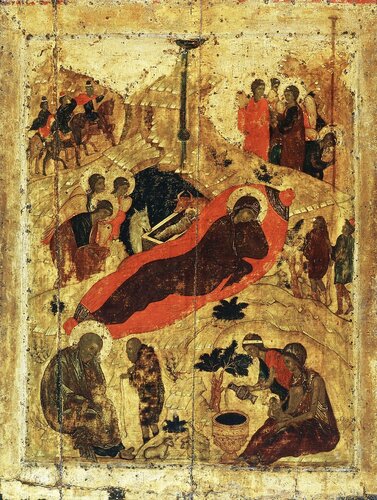 Researchers also tie the Khitrovo Gospels, the frescos of the Cathedral of the Assumption on Gorodok in Zvenigorod (around 1400), and the Zvenigorod Deesis icons (early 15th century) to Rublev. The so-called Zvenigorod Deesis is one of the most beautiful assemblies of icons from ancient Russian painting. The Deesis consists of three half-length icons of the Savior, The Archangel Michael, and the Apostle Paul. / The Apostle Paul, 1410. 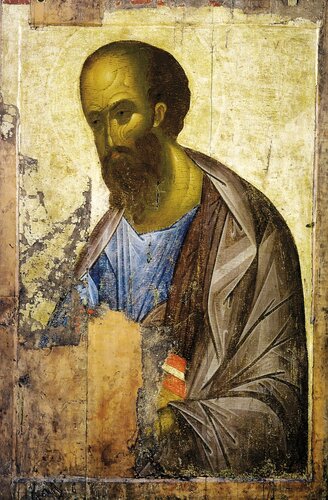 The Zvenigorod Deesis painting stands out for its unique cleanliness of color, the nobility of tonal transitions, and the luminosity of colors. Light radiates from the golden backgrounds and gentle swimming of the bright faces, the clean shades of ochre, and the blue, pink, and green tones of the clothes. In the image of the Archangel Michael, Rublev glorified the poet's quiet, lyrical contemplation. / The Archangel Michael, 1410. 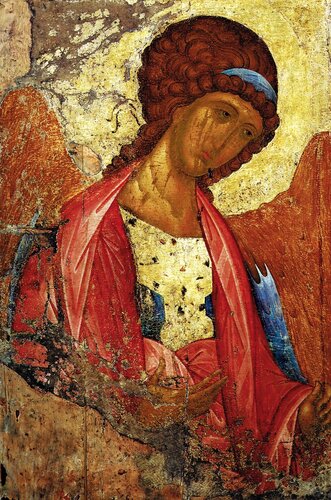 Rublev's Savior is a work that had an enormous influence on the artist's contemporaries, as well as on all future generations of Russians. He's alive, open, majestic, and, at the same time, a certain Slavic softness is felt in him; his facial features are slight. The range of colors is complete with golden and other different shades of ochre on the face, and a slightly dark, mild sky blue. The facial expression combined with the color range creates the impression of wise serenity. / The Savior, 1410. 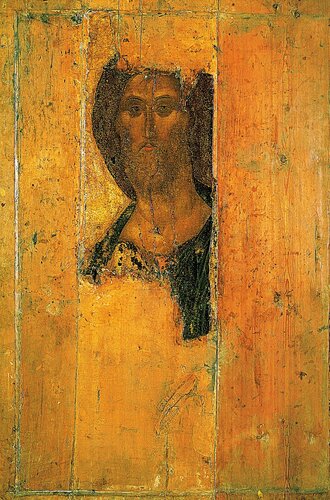 It can be asserted with great certainty that in 1408 Andrei Rublev was sent to paint the Dominion Cathedral in Vladimir. The Vladimir Dormition Cathedral was especially revered in Ancient Rus and the Grand Princes of Moscow never ceased caring for its upkeep. The "Ascension" icon from the Church Feasts Range of the Vladimir Dormition Cathedral's iconostasis possesses a special rhythmic composition like none of the other multi-figured holiday icons. / Ascension, 1408. 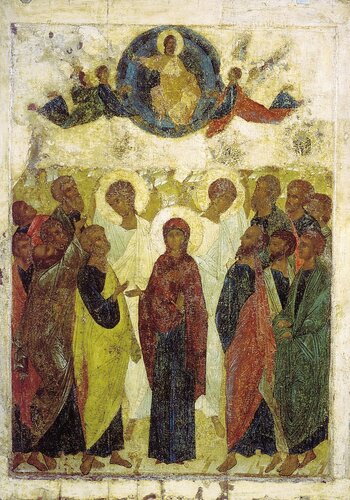 In Rublev's deesis at the Dormition Cathedral, there is an image of the young Virgin Mary dressed in dark colors that is unusually minimalist, yet conquers with its strict, noble beauty. Byzantine artists painted the Virgin Mary differently, expressing a tragic beginning in her image. This Virgin is not as young as Rublev's and is drawn in heavy, deaf tones. Russian artists strive to stir bright, cheerful feelings in the viewer. / The Virgin Mary, 1408.

A large part of the frescos at the Vladimir Dormition Cathedral, painting in 1408, are composed of fragments of Judgment Day; the preserved frescos represent a fragment of the grandiose Judgment Day composition that occupies the Western wall of the cathedral. The emotional mood of the scene in Judgment Day is unusual in that there is no sense of horror in the face of terrible punishment, but rather the idea of forgiveness and an enlightened mood triumphs. / Judgment Day, 1408. 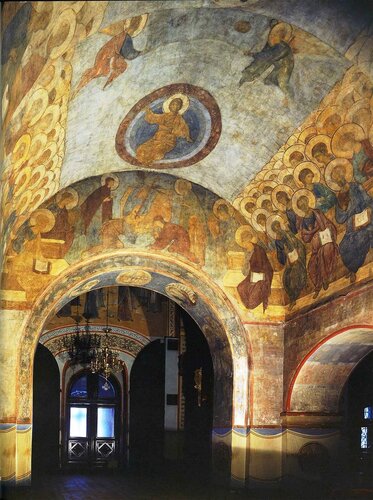 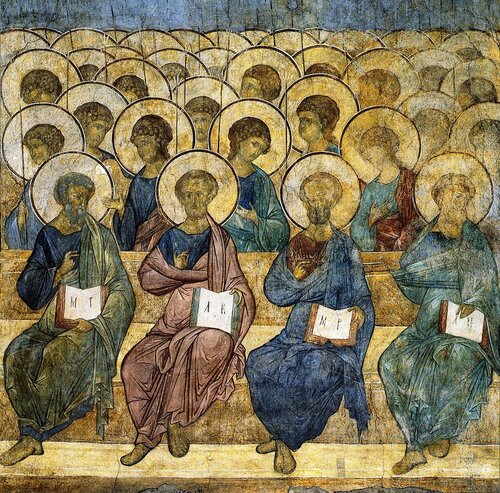 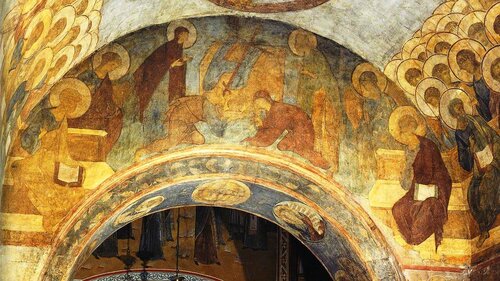 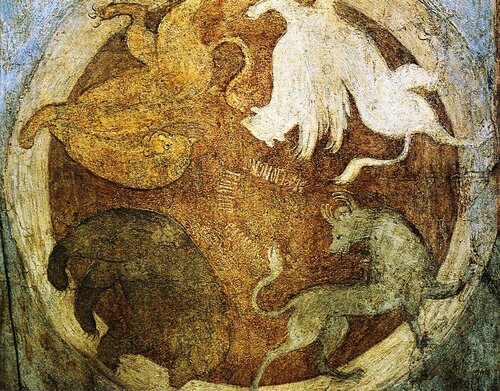 Although Rublev's name is managed in the chronicles in relation to the construction of various churches, he became known as an artist only in the early 20 century after the 1904 restoration of "The Trinity". In Rublev's icon, attention is centered on three angles and their silent conversation. God the Father blesses God the Sun at his death on the cross in the name of love for all people. The Holy Spirit (the central angel) is present as a consoler, confirming the profound meaning of sacrificial, forgiving love. / The Trinity, 1410. 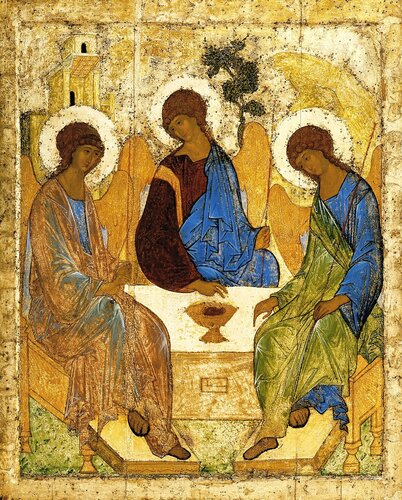 A humble monk, who dedicated his whole life to creating frescos and icons, he was respected and widely-known. However, he was forgotten by his descendants and many of his works were lost. Even at the beginning of the 20th century, some experts couldn't reliably name even one of his works. In all years of Andrei Rublev's life, he was a monk at the Spaso-Andronikov Monastery in Moscow. Rublev died of the black plague on October 17, 1428 . He listed by the Russian Orthodox Church as a saint. / Deposition of Jesus Christ, 1425. 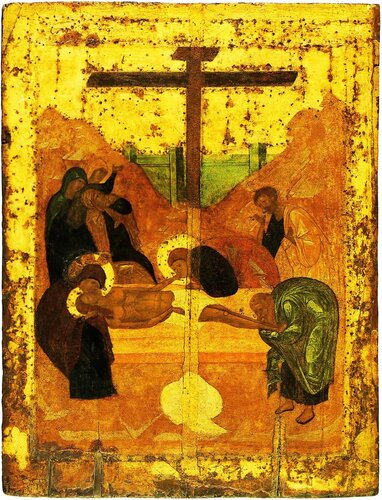 Russia Beyond the Headlines is produced by leading Russian daily Rossiyskaya Gazeta. Russia Beyond the Headlines is an internationally recognized source of political, business and cultural news and analysis. It offers original, on-the-ground coverage of Russia from professional, independent journalists who are passionate and knowledgeable about the country, and opinion pieces from commentators who hold a wide range of views about Russia’s leadership and direction.

Rossiyskaya Gazeta www.rg.ru is the Russian government’s paper of record and provides the official publication of all laws, decrees and official statements of state bodies. In addition to its official functions, Rossiyskaya Gazeta is also a general-interest daily newspaper offering regular coverage of news and events along with opinion and analysis.

RBTH’s mission is to bring original stories about Russian culture, business, politics and science to foreign readers; facilitate media engagement between Russia and foreign countries; and regularly update the international community on the economic, geopolitical and cultural potential of Russia.

Since 2007, Russia Beyond the Headlines has published monthly supplements about modern Russia in leading global media. The first was Russia Now in The Daily Telegraph (UK).